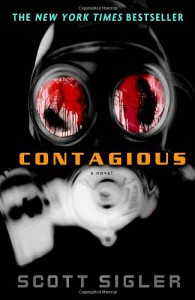 Immediately after I finished reading the first book in this series, Infected, I had to continue with Contagious.  Although not your classic cliffhanger ending, I wanted to get to the next part of the story, and because I have read Contagious before, I knew that it was more action-packed, intense and gory apocalyptic horror just waiting for me.

Where Infected focuses on three main perspectives in Margaret, Perry and Dew, Contagious broadens to include a host of other unforgettable characters, some of whom are definitely not your normal baddies, and a disease that grows more and more brutal as the story continues.

What I particularly enjoyed about the characters in Contagious is the development - Perry is still dealing with the events of Infected and the impact is intense.  As the book progresses however, he definitely develops into an even more admirable character and I really enjoyed seeing his relationships with the other characters grow.  For much of Infected he was flying solo, and it was the final piece of his character that fell into place.

I also felt that I got to know Margaret as a character more intimately than I did after Infected, and it definitely warmed me to her, particularly as she struggled with some difficult decisions.  Knowing that she is the main focus of the next book in the series, this was a huge plus for me - if I hadn't found her to be more likeable than in Infected, it probably would have muted my anticipation for Pandemic.

Dew also continues to become more of a well-rounded character as he begins to let down the walls that he had in the previous book and connects with the other characters on a more personal level.  It felt like all three characters were completely invested in the storyline and in each other, and seeing that growth was incredibly satisfying.

One thing that really stood out to me in Contagious is the increased military presence.  Understandably, its not that prevalent in Infected which focuses far more on the initial outbreak, but it's also something that I don't find particularly interesting, although by my standards it was very well written and explained.  This is particularly where Contagious was a weaker book for me than Infected and I found the POV of the character most heavily involved in the military aspect to be the least interesting and I started to develop that nasty habit of rushing through a POV just to get through that part of the story.  This is all a personal preference of course.

The pacing of the story is fast yet detailed and once again the shorter chapters (and the chapter headings are pure genius by the way) made it difficult to put the book down.  The POVs switch quite often, which I know is a turn off for some people, but I like the fast-moving feeling that it gives the story as it fits with the pacing.  Contagious ends not with a cliffhanger but openly, leaving a way for the story to be continued, but enough to round off the book perfectly.